This weekend, the 4th, is my brother’s birthday so last weekend my brother, dad and I went to a place called Bounce Below in Gwynedd, north Wales. Bounce below is a huge disused slate mine that a company has turned into a giant indoor trampoline centre. There are different levels to the trampolines and chutes in between them to get from one to another. It is amazing! And it has only been open for about a year so we, in a way, were some of the first people to try it. 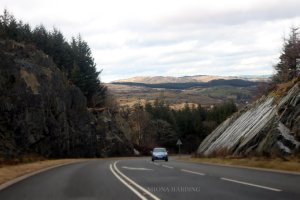 Getting to the place took us over 4 hours (including getting lost and ending up in Aberystwyth) so we went up on the Saturday and did the fun stuff on the Sunday. Driving up we went over all the mountains and I felt like I had been transported to Lord of the Rings. It was so beautiful! Sadly on the way back when I was going to take some pictures we went the wrong (well, right way for going home) way and drove around the mountain instead, but hey, that just means another trip soon!

We stayed in a Travelodge in Porthmadog which was about a half an hour journey from Bounce Below. On the Saturday night we had dinner at this lovely pub called The Ship where I had a delicious chicken roast. And the next morning we returned to the high street for a Costa breakfast (bacon, brie and caramelised onion panini – delicious!)

Sadly, on the Sunday the weather was so hazardous that the zip wire we were supposed to go on was cancelled. But luckily they said we can rebook within 12 months so we will certainly be going again.  However, this meant we had time in the morning to go exploring. We headed towards a little village called Betsw-y-Coed where there was a huge waterfall and beautiful scenery.  We took loads of pictures here and returned here after our Bounce Below session.

Bounce Below was absolutely amazing! They gave us helmets to wear to obviously protect ourselves and then you get an hour to play. To be honest though an hour was enough! You want a full workout you got it with this! They also take your picture in there so we got one on a piece of slate which I thought was really different.

The whole weekend was really good and at only 20 pounds per person to go into Bounce Below I thought that was amazing and something so different to try out – I definitely urge you to go if you can! I’m going to do a full post on the food I had over the weekend because it was amazing and I will also being doing a post on a little gift I bought myself, so you’ll have to check those out.