The Woman in Black Review

If you like suspense movies, this is one for you! The Woman in Black terrifies me, but then again, it isn’t the jump scare that scares me but the build up. To think that this has gone from a book, to a play, to a movie that has sequels is amazing! That has to tell you alone that it is worth a watch. 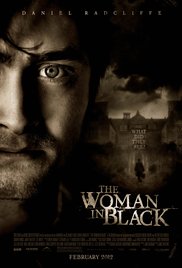 The Woman in Black is a story about Arthur Kipps who deals with paperwork and wills. He is the sole carer of his son but leaves him with a nanny to pursue a piece of work. The house he must visit people do not dare go near because of the woman in black. It is said that if you see her, a child will die. As Arthur spends time in the house he starts to see her and ultimately children begin to die around him. He soon finds out that the woman in black had a child who was accidentally killed in the bogs. Arthur believes that if he finds the boy and reunites him with his mother she will stop killing people. This is wrong however when she finally takes her last victim, Arthur’s own son. He walks out in front of a train and Arthur goes to save him but they both die. It’s a happy ending however as they are reunited with Arthur’s deceased wife. How lovely.

This movie is terrifying, I can’t even imagine what it’d be like on stage. This movie is all about suspense and red herrings. Having loud jump scares but mediocre things happening really adds to the feel of the overall movie. As it is set in the 1800s everything is very bleak and dark with a lot of grey tones. This movie is dark and a bit gruesome at times, especially with the girl who sets herself on fire and the one who spits up blood. This is not a movie for the faint of heart as it will keep you on your toes from the first moment.

This was Daniel Radcliffe’s first big role after Harry Potter and I think he did well. He had the right look and feel for the part and shrugged off the Harry Potter quite well. I can’t really imagine another actor in this role.

If you like movies with a lot of suspense and creepy undertones this is a movie for you. It’ll have you covering your eyes at every moment and the story is so intriguing it’ll make you want to see the play too! (it did that for me anyway).

Have you seen The Woman in Black? What did you think?