Four Christmases is one of those movies that is just a bit of fun and has a lot of funny moments. Overall it has that obvious personal growth element that makes you feel all warm and fuzzy but doesn’t dull down the comedy. I personally just love it because it’s Reese Witherspoon. 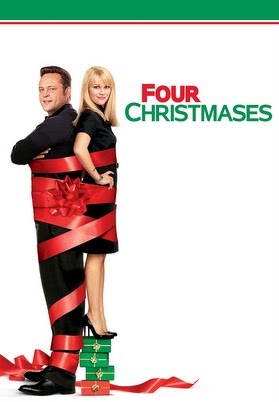 Four Christmases follows a couple who make up lies every Christmas so that they don’t have to spend Christmas with their families. These lies include helping children in foreign countries and other charitable acts when really they’re just jetting off to somewhere far away. This year however, they don’t get to leave thanks to a fog cancelling all the flights. Before they’re able to sneak away a News Crew interviews them about the problem and of course their families are watching. They end up spending four christmases with different family members including Brad’s mum and dad (as they are divorced) and Kate’s mum and dad (divorced too). Hilarity ensues but a lot of personal growth happens especially with Kate and Brad who work out what they want from each other and what they want from life.

This is a typical American comedy with a lot of quick gags including fat jokes, vomiting and random jokes that have more set up than punchline. Apart from that it’s not a bad movie. It’s not the best one out there but for a nice movie to watch with a loved one it’s definitely one not to be missed.

This movie definitely reveals a different side of Christmas. A side that people don’t really consider. The families that are ‘broken’ and don’t get to spend Christmas together. It also highlights how important family is and how time can change things, sometimes for the better. Just because you remember a person one way doesn’t mean they can’t surprise you a few years down the line.

What do you think of Four Christmases?