Home Alone is a staple Christmas movie. It is everything Christmas is. Family time. Holidays. Great food. And leaving your kid at home so they can be terrorised by robbers! Wait…what?

Home Alone follows little Kevin and his family who are spending Christmas away from home. They all leave in a rush and accidentally leave Kevin behind.

How do you leave a kid behind? Not only do this family have a million kids it’s not like he’s a teeny tiny one that could easily be forgotten. Also, wouldn’t you have noticed there was one empty car seat? Or that you had an extra passport at the airport? One of these kids must have noticed, and yes, I know he wasn’t the most popular but I doubt they’re that mean.

Anyway, carrying on. Two robbers have an interest in Kevin’s family home as it is huge and empty. They start to break in but Kevin has other ideas and builds his own traps to stop them.

He literally sets a man on fire! He burns another man’s hands and, to be honest, if this was real life Kevin would be charged for murder or at least manslaughter by now! No way could they handle the amount of pain and torture they were put though.

But anyway, in the end, he holds down the house well and his family returns after realising they had forgotten him and he is loved and happy once again. 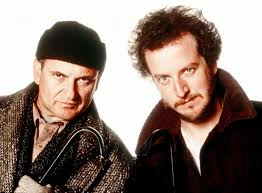 I love this movie, I do, but if you really look at it and not through rose tinted glasses it is so messed up! Kevin has no remorse or care to hurt other humans and the fact that he can even work out how to make these traps is ridiculous! Maybe he has too much time on his hands because his parents always forget him…hmmm….

If you haven’t seen Home Alone then please do because it is a great family Christmas film. It has a lot of laughs and if you don’t take it too seriously like I clearly do you can enjoy it without feeling any worrying feelings towards Kevin. Maybe We Need to Talk About Kevin… 😉

What do you think about Home Alone?