Movie That Makes Me Sad

This movie was a shocker that I never thought could be so beautiful and so sad. Disney really outdid themselves with this movie and I don’t think another has been as good as this movie since. 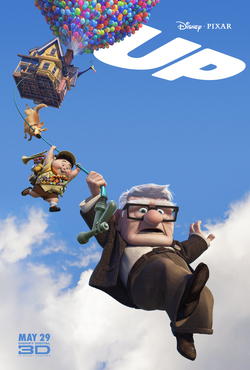 Up is a beautiful movie that I won’t talk about in too much detail as it had so many moments that I didn’t even expect that I want you to experience first hand and not through my review.

All I’m saying is it involves Carl and Ellie, two people who meet when they’re children and grow old together. A now widowed Carl wants to fulfill Ellie’s childhood dream of moving their house to the top of a waterfall. He decides to do this using balloons which created one of the most beautifully animated moments in movie history.

He accidentally brings along little Russell a wilderness explorer who becomes an unlikely friend and ally to Carl. Along the way they meet Doug a talking dog and Kevin, a girl bird.

There’s a lot more too but I don’t want to give a lot away as I described earlier.

This movie is stunning, from the storyline to the animation to the bond between the characters it is all so pure and beautiful it will make even the hardest person crack. Disney has this way with music and it definitely shows through in this movie. Just from one scene near the start where we travel through years of Ellie and Carl’s life the only thing you hear is the music and it is so poinent and memorable it will stick with you ages after watching the movie. To be honest, even just hearing that piece of music makes the hair on the back of your neck stand up.

You may think Disney is just for kids but this movie completely changes that. This movie is for the adults, it has the fun for the kids, but it’s a movie where all the children will be asking you why you’re crying.

What’s one movie that makes you cry?