On Thursday/Friday the new Pirates of the Caribbean (yes there’s another one) movie comes out so I thought it’d revisit the other 4! (yes…4)

Can you believe this whole franchise was based off a Disney ride? Google it, it’s pretty cool.

The Curse of the Black Pearl starts off with Kiera Knightley’s character, Elizabeth Swann, finding a young boy helpless at sea (they’re around the same age). This boy turns out to be Will Turner (played by Orlando Bloom). He has a pirate medallion around his neck and she takes it from him.

Will is a bit of a pauper and Elizabeth is the Governor’s daughter so of course there is some form of friction here. They grow up and Will meets Captain Jack Sparrow (Johnny Depp) the main man of the franchise. During this, Elizabeth is captured by the crew of the Black Pearl who are searching for the medallion. Here she meets Captain Barbossa.

The movie is mainly about Jack working to get his ship back, the Black Pearl. But it turns out the crew who took it over are actually dead and can only be seen in their skeletal form in moonlight. Jack uses this to his advantage when he uses Will Turner’s blood (who’s father was a pirate) to break the curse on the crew and make them mortal again. Thus killing Barbossa and being able to take his ship back. 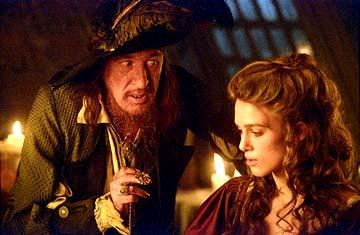 This movie also included a post credit scene which, at the time, was not a common occurrence so a lot of people would have missed it.

This movie is great, it is a proper action-adventure movie with a lot of comedy thrown in. As we all know the soundtrack is amazing and the storyline holds up too. This is the classic, this is what made Pirates of the Caribbean what it is today and is definitely a great movie to go back and rewatch. And, let’s be honest, this is the movie that sparked a lot of little girls (including me) to fall in love with Orlando Bloom.

What do you think of Curse of the Black Pearl?