Who would’ve guessed it, the second season was not as good as the first. 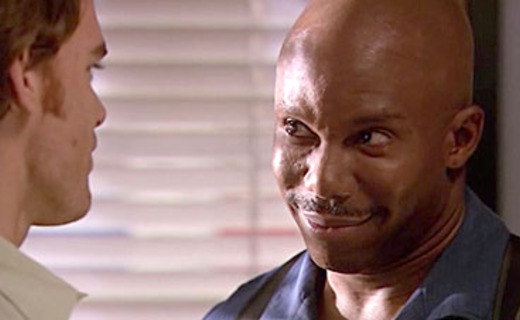 In this season Dexter’s murder history comes out when his stash of dead bodies is found by divers. He is still with Rita but she believes he has an addiction….to drugs. He agrees to get help and gains a sponsor in a woman called Lila. Lila (who also was in Hustle) is a psycho who always gets her way. Obviously she causes a rift between Dexter and Rita.

Alongside this, and his secrets coming out, Doakes knows something is wrong with Dexter and this really goes bad for him. He follows Dexter to try and find out his secret when he finds his box full of blood slides. Stashing it in his car the detective on the murders finds it and believes he is the murder. Dexter obviously uses this to his advantage.

This season started off slow but the ending definitely made up for it. In the end Dexter is cornered by Doakes who tries to arrest him. Dexter manages to drug Doakes and lock him up in a cage in a remote cabin. Lila finds the cabin and finds Doakes inside. She turns the gas on and lights a fire causing an explosion and ultimately killing Doakes. I’ll be honest, you can see it coming because either he dies or Dexter’s secret gets out which obviously can’t happen. I thought he’d be around for a little longer though but ah well.

This season was ok. It felt like it had a lot of relationship drama and that’s not what I’m watching Dexter for. It makes sense that he wouldn’t kill people while he’s under suspicion but at the same time that’s what we watch the show for! I didn’t care about Rita’s drama, Deb just creeped me out and Lila was the worst character imaginable.

While I enjoy watching Dexter and season three seems promising I found this season just so boring. I wouldn’t recommend watching, it didn’t add much to the overall storyline apart from a few more secrets from his past and really just dragged.

Let’s hope it gets better.

What did you think of Dexter season two?