Let me tell you now, I love the idea of this movie, but I have no idea how they’ll make a conflict and full story out of it. 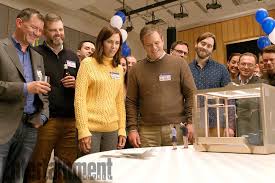 Downsizing stars Matt Damon and Kristin Wiig as a couple in the future. There is a problem on Earth with overpopulation but a company has found a way around that using a procedure that will make humans tiny. Basically like the Burrowers. These people then get to have their sized versions of everything including homes, transport, and clothes and live alongside the big or normal sized humans. It’s a permanent procedure so once you’re small there’s no going back but the benefits seem immense including more money and giant food so you will never go hungry.

So I bet you’re asking: what’s the catch?

Well in the first trailer one isn’t shown. Everything seems to be perfect so of course there must be something wrong. Maybe the tiny humans are getting trodden on, who knows? It does make me excited to see what the issue with this plan is and where this movie will go because, for now at least, it all seems too good to be true.

Imagine it. Being a tiny human but you don’t feel tiny. Your friends and neighbours are all tiny too and you live in a beautiful home with lots of money and even more of a world to explore. The only issue could be wildlife, especially ants and bugs, I mean we saw that in Honey I Shrunk The Kids but this movie doesn’t seem to be a funny family one. It’s described as a comedy, of course, but it seems too happy. Too peaceful. What could go wrong?

If this became a real thing I think I would downsize simply because there’d be so many benefits and you’d be helping the world too. With the likes of What Happened to Monday, Hunger Games and a bunch of other dystopian movies it’s clear we are not heading in a good direction so maybe something like this could make all the difference.

What do you think of Downsizing?