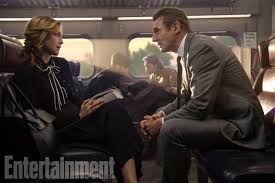 This movie looks amazing. It’s a very simple story about a man, Michael, who commutes to work everyday at the same time and so always sees the same people and commuters. But then something changes as a woman, Joanna, who he has not seen before sits with him and tells him she studies people. She tells Michael that there is a person on the train that does not belong and he has to find them, if he does he gets the money that is hidden in the bathroom. It’s kind of weird but looks really interesting. There’s a lot of action, of course, a lot of suspense and I just want to know who is not supposed to be on the train.

So theories! I think the person is either the woman speaking to Michael or Michael himself. I’m guessing there may be more to his character than meets the eye and honestly we don’t even know where he goes everyday or where he works. He could be a CIA operative for all we know. Then of course Joanna is not someone seen often on the train so clearly she doesn’t follow this route a lot. Maybe she’s the one. Maybe it’s a big scam and she chose Michael for a reason. There’s probably a lot more to this movie but for now all we have to go on is what we see in the trailer.

I’m excited for this movie. I think it could be a lot of fun and very tense. The story looks like it follows a lot of different twists and turns and the characters look like they have a lot of depth and this makes me want to get to know more about them.

Liam Neeson is an absolutely amazing action star so you know he will be good in this role and he is just a wonder to watch on screen. This movie is definitely on my watch list and I can’t wait to see what else is revealed overtime in the other trailers.

What do you think of The Commuter?