I saw this movie when I was 14 so at the prime age for this sort of thing and I absolutely adored it. Now I watch it back as a 22 year old (nearly 10 years on!) and cringe like mad.

Angus, Thongs and Perfect Snogging is based off books by a woman called Louise Renninson (books I was also obsessed with, I wrote about them far too much in my diary!) the movie follows a young woman called Georgia who is just turning 15. She is a bit of an outcast but has three amazing friends called Jas, Ellen, and Rosie. When we meet Georgia and the gang two new boys, twins, have joined their school and the girls are hell-bent on getting with them. This includes using their friends to get close to them, spying on their girlfriends and even going to a boy’s house to get kissing tips!

See why I find it so awkward?

But I think the worst thing I found about this movie is how bad it is for a young person to watch! The characters are all toxic and the only good one, in my eyes is Dave the Laugh a boy who is often overshadowed because he’s just a typical boy.

First off, let’s talk Robbie. Robbie is the main heart throb in this movie and the one Georgia is after. There is a point where Georgie and Robbie do end up making out at an outdoor pool, cute right? Well in my fourteen year old mind it was. But Shona you’re missing one thing, he’s cheating on his girlfriend! Oh wait, no that’s fine because she’s called ‘Slaggy Lindsay’. It only gets worse because the day after he dumps Lindsay he asks Georgia out! Jesus Christ boy give the dust time to settle! Georgia, if he’s going to be this flippant with girls you do not want to go near him. 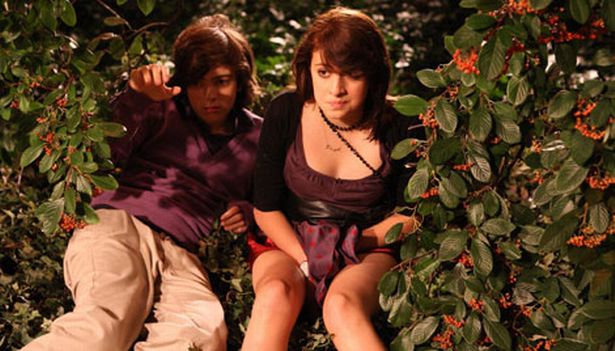 Then there’s Peter Dyer a boy who lets girls come round to his house so he can teach them how to kiss properly. Have you never heard of mouth herpes? Anyway, if that’s not creepy enough he then becomes obsessed with Georgia, calling her all the time, even forcing himself upon her at a party and only finally gives up when she tells him she’s a lesbian!

The biggest problem with this is far too many men are like Peter Dyer. Not realising what they’re doing is wrong and also not being told it’s wrong either by other people. Instead of helping Georgia when Peter publicly humiliates her at the party her supposedly ‘best friend’ just walks on. Easier to be accepted into the ‘popular crowd’ then to stay true to friends isn’t it Jas?

And finally, there’s Georgia, the girl we’re all supposed to root for. Not only does she want her 15th birthday at a club which is ridiculous (and she finally gets it because spoilt) she stalks the boys with her friends which is just creepy, uses Dave the Laugh just to get close to Robbie and really hurts his feelings and thinks she deserves the world. After the kiss at the pool she can’t understand why Robbie hasn’t dumped Lindsay yet to be with her, do you not think maybe he was just using you a little bit because you put yourself out there far too much? Oh and don’t even get me started on them all calling Lindsay slaggy just because she wears a thong and stuffs her bra. Maybe Lindsay is insecure about her breasts and so needs a bit of support especially during puberty when your hormones are utter monsters (call back to Big Mouth see what I did there?).

I also hate how in the end they made Lindsay out to be the villain all because she was annoyed that Robbie picked Georgia over her. Hey I’d be annoyed too if my boyfriend cheated on me then started dating that girl straight after he dumped me.

Looking back on this movie it is absolutely terrible and I would hate for my hypothetical daughter to watch it. She should be learning about empowering women and not letting boys get their way all the time. Not how to stalk people and steal boys from other girls.