Let’s put our minds back to 2015. Let’s forget that since then basically all of the contestants have broken up or have gone on to have a baby! Let’s pretend this all just happened. Now I want to analyse. Because if it were me watching this live, I’d spy a lot of snakes! 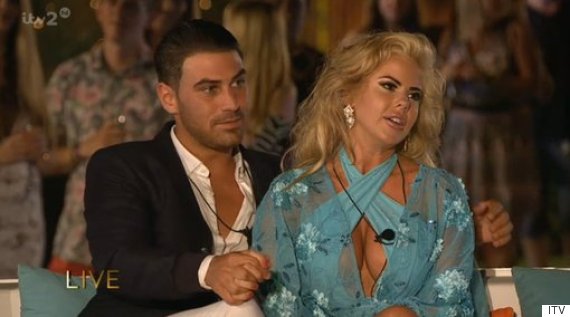 Hannah and Jon were one of those couples you loved. You wanted them to do well but you also loved to see them bicker and fight because drama is too entertaining. They got together on day one and spent everyday together as a couple. Even becoming exclusive partners and, in the end, engaged. Their love seemed to go against the test of time, but was it really all as loved up as it seemed?

What I noticed watching these two was Hannah was incredibly emotional and defensive and Jon thought he knew everything. They seemed quite toxic in my eyes. Arguing over little things and not really sorting it out but rather going off in a huff until the next argument. But then that’s how some couples do it, they argue a lot, cool off in their own space and come together again. But does anything really get resolved or sorted that way? Yes they clearly loved each other but they had literally known each other for 6 weeks. That was way too soon for anything that was happening between them.

But then you have to think about the money.

There was £50k up for grabs, what if it was all a show? People would go on and on about how they’d have sex and you wouldn’t do that if there wasn’t a connection. Believe me, drunk stories from people will definitely tell you different. And the proposal at the end, to me at least, seemed like a last ditch attempt at getting more votes, securing their win and the money. It seemed too fake, too quick, and yes maybe they really did love each other and they did want to get engaged but there was more to it. £50k was in the back of their minds and they can’t say it didn’t have something to do with the quick decision.

Jess was one of these characters you hated but when you really looked into why you hated her it didn’t make much sense. Yes she lied, but wouldn’t you if you thought the truth would never get out? You already got pied off once you don’t need all the lads laughing at you too for it happening. Yes she should’ve been honest when she was found out but sometimes the truth can be the hardest thing to admit.

And let’s talk the lads. They were horrible to her! Constantly taking the mick out of her and belittling her. If I was in that situation I would get angry too! I think anyone would. Especially when you have no escape from it as you have to live with them. It’s a complete toxic environment and I did feel sorry for her. She made mistakes sure but any mature person would forgive it and move on. Not them, they constantly had to go on about it, far too much testosterone in that atmosphere.

Finally, all I can say about this season was there were a lot of ups and downs and a lot of interesting points (especially Lauren making it all the way to the end with no interest in anyone). But I feel it was a bad season. People even now watch it and idolise Hannah and Jon’s relationship when really it was more up and down than a rollercoaster and pretty toxic. If Jon treated me the way he treated Hannah he’d be long gone and we’d never make the final!

It’s one of those shows you hate to watch but can’t stop watching. You have to be a certain type of someone to be interested in going on that type of show and they’re definitely not the good people in the world. The only good one was Camilla from last year who worked in war torn countries and had a bit of class about her. Otherwise it’s a quick slot into the world of social media influencers with their Boo Teas and charcoal face masks.

And does anyone else find it weird a lot of them have friendships or connections to people from TOWIE and Geordie Shore?

Just randomly pulled from the public? I think not!

What do you think of Love Island?