Happy Death Day follows Tree a college girl who lives in a sorority. She’s a bit of a mean girl really and doesn’t get along with many people. She wakes up on the morning of her birthday in some random boy’s dorm room and goes about her day until she is brutally murdered in the evening.

Then she wakes up again on her birthday again.

And the only way to stop this cycle is to stop whoever it is that is killing her. She’s kind of lucky really, most of us would just die and that’d be it.

But, of course, with her being such a mean girl there are plenty of people with motives and they even try to throw in a Scream ‘the killer of my mum is on the lose too!’ storyline into it.

It was a good movie sure, it was easy to watch and had some funny moments as well as tense ones but it wasn’t fantastic. It’s pretty forgettable and the killer’s mask just looked ridiculous. 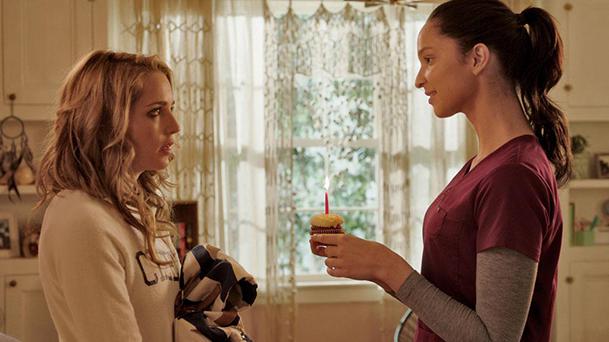 Oh and let’s talk bad guy, well it turns out to be someone who you wouldn’t suspect but at the same time made themselves way too obvious. The amount of moments you notice when you watch it back you kind of wonder how you didn’t notice it in the first place. And how the murderer was defeated in the end was a bit weird and very quick and didn’t make a lot of sense to me. Surely the outcome wouldn’t have happened like that in real life? But then this is movie life so it doesn’t need to make too much sense does it?

I probably wouldn’t watch this movie again unless a friend or someone said about it. It was ok but wasn’t great and left me almost wanting more. I wanted to see more of her change and grow as a person rather than concentrating on the killer and how she could defeat them. Yes there were some interesting twists and it felt fresh and new and not dated (although it easily could be in a few years) but it was still a cliche horror mess trying to be something new.

You want a new style horror? Try Get Out instead.

What did you think of Happy Death Day?