Eh, it’s a Saw movie, you know what you’re getting into. 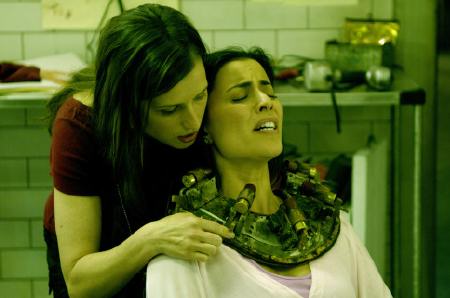 In this installment John is dying and needs help. His cancer has become too much and he may not get better so, being the trusty cult follower she is, Amanda kidnaps a doctor to try and save him. The doctor is told as long as John is alive, she will be alive, no pressure there then.

But then there’s the game too. A man, Jeff, wakes up in a wooden crate and has to go through a series of tasks where he must decide whether people who helped his son’s killer go free from jail deserve to live. His backstory is his son died in a hit and run and since then he has been grieving and this has caused tension within his family. Apparently this is enough for Jigsaw to punish you these days.

He goes through many challenges and saves, and doesn’t quite save, many different people until finally his ultimate test is to not kill John. which he fails, because of course he does we need the big finale. Cue lots of blood and the doctor getting her head blown off. How lovely.

This, I think is where Saw starts to have its downfall. It hasn’t quite made it to absurd yet but to punish a guy for not getting over his son’s death is a bit harsh isn’t it? John’s character is the best part of Saw so seeing him die is a huge shame.

This movie had all the standard Saw tropes including blood, gore, and even dead pigs and (as I saw in the behind the scenes) actual real live maggots! Now that is awful.

But I do credit Saw for that. They started low budget and yes found their place in the horror genre but still kept it pretty industrial and real. No awful CGI effects here (thank god there were no moustaches!).

Saw is a great franchise that does lose its way after a few movies but is still something fun to watch. I definitely recommend giving Saw a go but maybe not with your group of friends as they may see you as ‘the weird one’ after that.

Not coming from personal experience…I promise.

What do you think of Saw 3?