With Apocalypse coming out soon I thought I would venture back in time to the first AHS season. I’ve reviewed some other seasons including Roanoke, Hotel, and Cult, but I had already watched the earlier seasons before even starting my website. Now is the time to reflect. 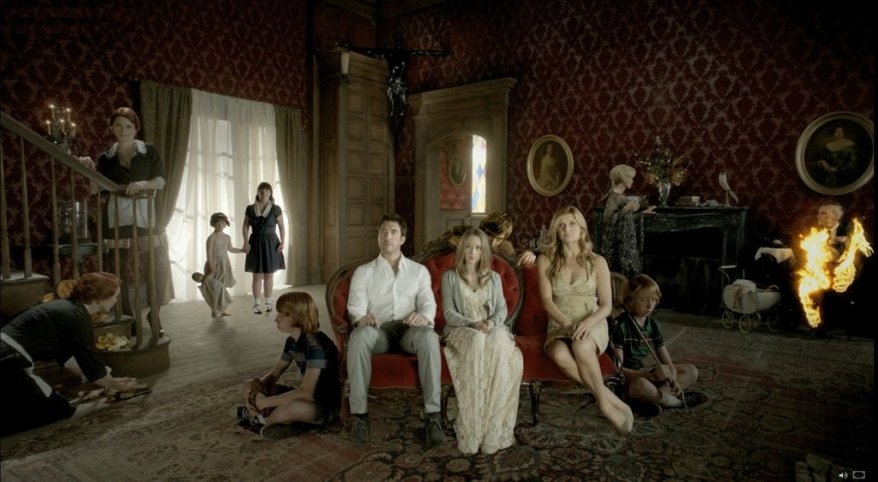 Murder House follows a family, a dad, his wife, and their daughter Violet who move into a new home that is a lot cheaper than others because there have been many deaths there. The only issue is when the person dies on the property and their body is not removed their spirit stays there and haunts the home.

Violet becomes friends with a boy called Tate who is actually dead and has been for some time, he killed a bunch of kids in a Columbine style massacre and was subsequently killed by the police.

Overtime more and more spirits come to the home including the two gay men who owned it before the current owners, the maid who is able to make herself look old or young dependant on what she is hoping to achieve in the situation, and the original owner of the house who just wants a baby.

And that’s where things get weird. Tate impregnates Violet’s mum but she has twins, one being Tate’s child and the other being her husband’s. Obviously Tate is dead so the baby is technically half dead (hopefully we’ll learn more in Apocalypse) and causes her a lot of problems during the pregnancy and the birth.

In the end, well it’s called murder house isn’t it? The family die and Tate’s mum takes on his son who seems to have a similar violent and murderous tendency as his father did.

It’s one of those seasons where a lot goes on and you have to pay attention otherwise characters will pop in and out and you won’t really have a clue what’s happened. Some of the characters are only really there for one episode so they’re not important but with the constant re-appearances of old characters and new it can be easy to lose track.

What I loved about this season is it really told you what AHS was all about. There was horror, there was gore, there was jump scares and everything kept you on your toes at all times. I really feel there’s something within this season that would scare anybody. The constant references to real life events as well was very interesting to watch and having the story and the pasts of these characters slowly unravelled before your eyes is very exciting and keeps you engaged. You don’t get bored or uninterested because there’s so much going on.

I would definitely say Murder House is one of the better seasons of AHS and if you haven’t already I’d definitely recommend it especially if you like horrors. With Apocalypse hitting our screens soon it’s good to refresh your memory and remember characters and storylines so when we hopefully see call backs in the new season it’ll make it all the more exciting.

What did you think of Murder House?