Finally I got round to watching this series and finished it in one evening. It was good, I will give it that but it also left me thinking a lot of the time: wait, why am I watching this again? 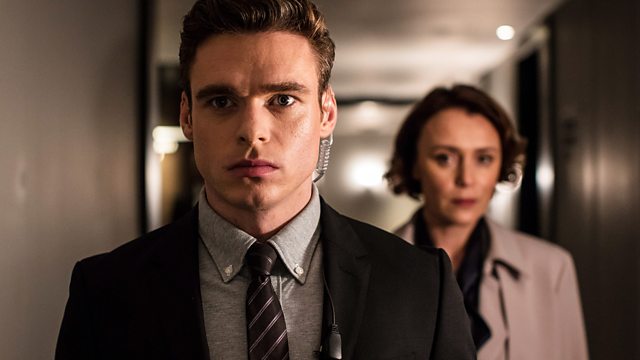 Bodyguard follows David a man who managers to stop a suicide bomber on a train and is moved up in the ranks in his job to the bodyguard of the Home Secretary, Julie. Julie is a conservative and isn’t the most liked and is also trying for the PM’s position so is hastily murdered in a bomb attack at one of her speeches.

Having grown close to Julie, David wants to find her killer and, let’s be honest this is the main part of the show. The climactic ending and twist however? Well that was pretty underwhelming. It turned out to be a crime lord among other people close to Julie and really wasn’t all that exciting. Kind of a very anti-climatic climax. Then it also turns out the suicide bomber that David stopped in the first episode is also in on it and isn’t a woman who is controlled by her man but rather a woman with quite evil intent. She even goes after David’s own kids and that’s pretty scary.

But why I asked at the beginning ‘why am I watching this?’ is mainly because it felt like nothing was really happening. No clues or surprises were being uncovered and there were so many leads and red herrings it really did throw you all over the place.

It was good overall but it was quite drawn out and it did leave you with some questions. Also, the ending with David in the bomb vest felt weird, like that wouldn’t really happen. It felt a bit too over the top and the way in which no one was listening was very frustrating and didn’t seem right. I either expected them to kill him off quick or at least send police to at least try and find out if the information David is giving is true. It just felt like it went on and on and I got bored pretty quick.

It was an interesting show with compelling characters and a good enough storyline to keep you engaged but I definitely wouldn’t watch it again. The ending was too much of an anti-climax for me to truly enjoy it and it just kind of ended after that, life goes on.

The BBC are normally amazing with churning out great autumn dramas but I do feel their downfall is the endings. Look at Thirteen for an example or Doctor Foster. The ending is always the bit where I lose interest and does stain the series a bit as a whole.

I’m glad I watched it because so many people recommended it, but I wouldn’t watch it again.

What do you think of Bodyguard?