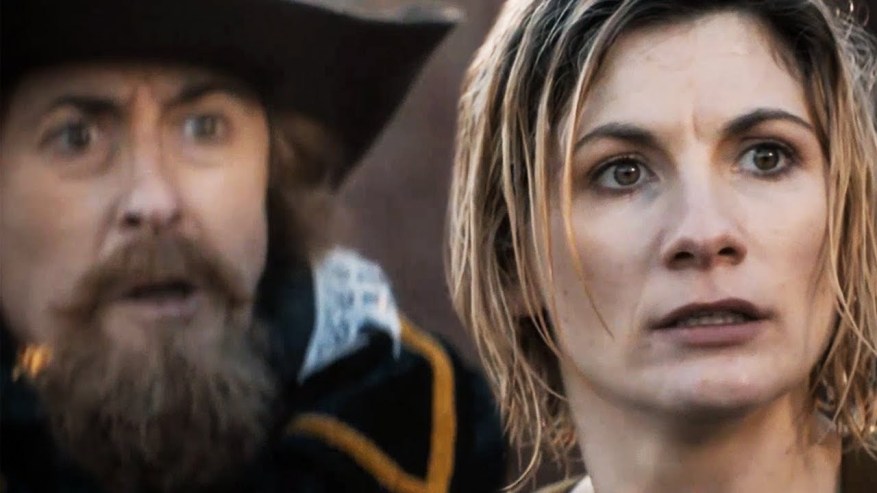 The Doctor travels back to the witch trials where she is confronted by King James and a woman who dunks witches. It is soon revealed there is more at play when the mud comes alive and starts taking over the recently deceased bodies, yes really. But that’s not all! Turns out the woman who dunks witches is in fact also a mud monster, but they’re not really mud monsters, they’re weird tree people who just want to be released from their jail they are in (which is, in itself, a tree).

On top of this there is an overly gay King James, a lot of female stereotypes, a weird storyline that had more parts than a double-feature episode of Doctor Who and it was all just ridiculous.

So let’s break it down shall we? Now the first part: the witches I was quite excited for. It looked like there could actually be witches and that seemed really cool and I like the nothing off limits style they went with the dunking.

Then we learn that it’s not witches but really this weird mud stuff. Of course King James and the rest still believe it’s witches and also believe the Doctor is too a witch. This is when the Doctor comes out with the line if she was still a man this wouldn’t be happening.

Now I’ve commended this season many times for not bringing up gender stereotypes or the fact that the doctor is now a woman and they destroy that admiration in one quick episode and I was so disappointed. It was as if they couldn’t help themselves and I am ashamed of the writers for making the Doctor just another stereotype and giving the ‘this new season is too PC’ crowd something more to grip onto. There was no reason for this. Yes I get it’s interesting to have the doctor in danger and what not but it didn’t really add anything to the episode. It was stupid and even now angers me to think about it.

Then we had King James who is honestly the most insufferable character I’ve ever suffered through watching and I don’t know whether he was actually like that or they just really wanted to amp up the camp but it was horrific. Every time he spoke I wanted to pull my ears off, I was so close to turning the episode off I’m glad I didn’t but at the same time it was a complete waste.

Then we had the tree people and this was a dumb add on, oh it’s Doctor Who we have to have aliens! No, no you don’t, not always and it seemed so convoluted and random it added nothing to the story bar give it an ending. It was like they wanted a twist but couldn’t really come up with anything justified so just used the most random thing to make it happen: a tree.

Overall I utterly despised this episode and I am so upset that what started out as such an amazing season could fall so far so quickly. I hope the next episodes are far better because this was rubbish and I hope nothing like this is ever repeated again. I used to say the show needed new writers because they felt out of touch and bored but if this is what they’ve found please keep the job offer open because I am appalled.